There is a symbiotic relationship between design, art and visual culture, and the exact sciences, which is attested in early scientific objects from al-Andalus and in medieval Arabic texts. In this talk I explore the objects, spaces, and figures that illuminate this relationship, focusing on ‘Abbas Ibn Firnas (d. ca. 887), the celebrated polymath of the Cordoban Umayyad court, and on al-Andalus and its contemporaries between the 9th-11th centuries.

Glaire D. Anderson is a historian of Islamic art of the caliphal period, with a focus on the art and court culture of Umayyad Cordoba. She is the author of The Villa in Early Islamic Iberia (Ashgate, 2013), co-editor with Mariam Rosser-Owen of Revisiting al-Andalus (Brill, 2007), and recent articles on the Islamic west in architectural history, women and the arts of Cordoba, and material culture and caliphal sovereignty. 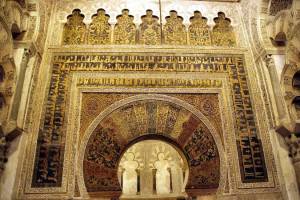 The research about Spain’s medieval cultural heritage has experienced a
great development in the last centuries. With the reassessment of the
legacy of al-Andalus and of the Reign of Castile and Aragon during the
nineteenth century, the historiography focusing especially on cultural
connections and disconnections has grown extensively. Concepts like
Reconquista, Convivencia and Mudéjar Art, are being interpreted as the
result of Spain’s nineteenth century’s particular socio-political
interests, related to the debate about national identity, religious
intolerance and to an evolutionist conception of history. The special
political and cultural reality of the Peninsula and its Middle Ages as

a geographical and temporal frame of cultural coexistence, pluralism
and heterogeneity has been controversially debated since that time.
At present, we assist to a critical revision and to an intense debate
on those inherited concepts. While the traditional historiography had
delineated several political, religious and artistic frontiers, new
conceptions of the medieval reality arise that interpret those
frontiers as being permeable and dynamic. This perspective leads to the
consideration of an artistic dialogue as the basis of shared
vocabularies. Such a dialogue will be the common thread of the present
conference: we intend to analyze, share and spread recent results and
new research projects on the Islamic and Mudéjar past of the Peninsula.
The conference will constitute a platform for novel lines of
investigation contributing to the debate on the artistic dialogue of
the

The following sections and themes are planned:

– Nineteenth century’s historiography: the reassessment of the Islamic
and Mudéjar past
– Islamic and Mudéjar urbanism
– Architectural reuse
– The twelfth century: dialogue or confrontation?
– The Iberian Peninsula and Europe: cultural connections
– Al-Andalus and the three cultures

Submission: Each presentation will be of 20 minutes, and may be given in Spanish or

English. Please submit a proposal of maximum 300 words and a brief
curriculum vitae by the 15th of April to the following e-mail address:
conference@transculturalstudies.ch

Eduardo Manzano Moreno (CSIC, Madrid) Delivering the Caliphate. The circulation of wealth and valuables in Umayyad ​Cordoba at the 10th/4th century

Broad views of “convivencia” as the main feature that pervades Umayyad Cordoba in the 10th/4th century have usually fostered a number of myths and misconceptions regarding its sudden “magnificence” and “splendor”. This has entailed that the material foundations of the Caliphate have usually been overlooked. The aim of this lecture is to show the role played by wealth and valuables in the social and political articulation of the Umayyad Caliphate, and how a proper assessment of these elements can render new insights for the knowledge of objects and material remains.

Antonio Vallejo Triano (​former director of the Madinat Al-Zahara Architectural Complex, 1985 to 2013) The Cordoba Caliphate through Madinat Al-Zahra: from its proclamation to its consolidation

Madinat al-Zahra was the great urban creation of the Umayyad Caliphate of al-Andalus. It was built in the middle of the tenth century as part of the ideological-structural programme launched by Abd al-Rahman III after his self-proclamation as Amir al-muminin (Prince of Believers) and within the context of his rivalry with other Caliphates, especially the Fatimid Caliphate. Since Madinat al-Zahra was one of the Caliphate’s main means of propaganda and legitimisation, the lecture seeks to explain how city planning and architecture not only reflect the structure of the Caliphate State but also its most pressing concerns and issues. This direct relationship, guaranteed by the sovereign’s involvement in all decision-making processes regarding construction, is one of the aspects that the lecture aims to bring to light. Moreover, the changes in palace architecture also clearly reflect the changes made to the configuration of the State. Madinat al-Zahra was not a static city but underwent very important transformation processes that can be read and interpreted in an historical context as a reflection of the evolution of the Caliphate State from its proclamation to its consolidation. The analysis of the decoratives materials of Madinat al-Zahra in the Victoria and Albert Museum, which were uncovered in the first excavations, will help corroborate these hypotheses.