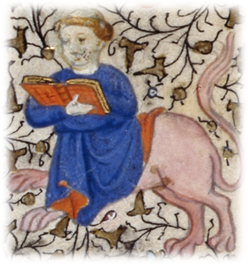 What is it to have a body? And to experience change and transformation through that body?

This interdisciplinary conference asks what the transformation of the body means for the conception of bodies of different kinds: human, nonhuman, animal, material, divine, and how the representation of these changes in different media reflects on and inflects the boundaries conventionally associated with the body. We are inviting abstracts from graduate students and early career researchers from all disciplines. Topics might include, but are not limited to:

Please submit abstracts of 250 words to warwickbodiesinflux@gmail.com by 15th December 2016. We look forward to hearing from you! 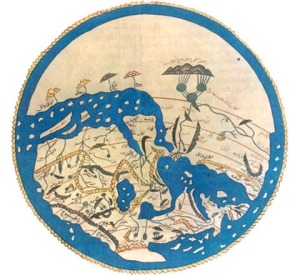 Proposals are being sought for “Mediterranean Cities in Transition,” a session at the  Society of Architectural Historians (SAH) Conference to be held in Glasgow, on 7-11 June  2017.

Mediterranean cities with long histories preserve the physical evidence of their role as economic and cultural hubs. The historic complexity of their contemporary state reveals their transition through time, with the medieval and early modern period setting the foundations for subsequent growth and development. As cities change through time, visible historic layers emerge (sometimes exposed by excavation) that reveal reforms made for new social needs. The layered architectural heritage is an integral part of the urban fabric of many modern cities, shaping the character and lived experience of the city. But a building’s value today is often very different from how it was valued at the time it was built. The material object connects past and present in a deeply meaningful way, but it does so on new terms. Therefore, making connections between past and present can pose challenges as contemporary residents try to determine the role of the historic fabric in contemporary rapidly growing cities.

We invite papers that will consider the city as a heritage field:

1) How and why does medieval fabric survive to the present?

2) How does this fabric of monuments, architectural tissue (walls and gates), urban spaces, and services (water supply and sewage) serve as a resource for the present? Is the value utilitarian, in the sense of a usable palimpsest, or is it valued because of how it is interpreted?

3) Does medieval architecture guide the subsequent character of the city? If so, does the old footprint pose a limit to growth, its narrow streets and enclosure walls impeding the city’s entry into modernity, or in contrast, does heritage fabric enrich a city’s sense of identity, cultural vigor, and connection to its own place?

4) What is the role of medieval architectural heritage in the context of contested and divided urban space?

HOW TO SUBMIT A PROPOSAL: Please submit your 300-word abstract for a paper by 3:00pm on June 7, using the SAH conference portal: http://www.sah.org/conferences-and-programs/2017-conference-glasgow/call-for-papers.

Note that only papers submitted through this portal will be accepted. We will not read nor can we accept papers sent directly to the co-chairs. 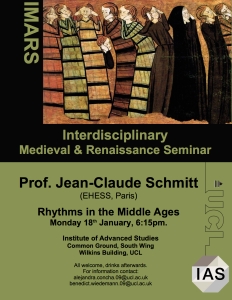 We are delighted to announce the next UCL IMARS Seminar of 2015-16. The seminar will be held on Monday, 18th January 2016 with Professor Jean-Claude Schmitt – Doyen of the modern Annales School – speaking. He will be presenting his latest book:

As usual the seminar begins at 6:15pm, but in a break from tradition, it will be in the Institute of Advanced Studies, UCL in the Common Ground, South Wing, Wilkins Building, UCL. It will, of course, be followed by a wine reception.

The programme for the first two terms of this year is online at: http://www.ucl.ac.uk/mars/seminars-lectures/imars

We hope to see many of you at this year’s seminars.

For more information on this seminar please contact: alejandra.concha.09@ucl.ac.uk

For information on the IMARS seminars generally please contact: benedict.wiedemann.09@ucl.ac.uk

Papers are sought on all aspects of ‘Science, Magic and Technology’ in late medieval literature and culture and particularly within Chaucer studies. Approaches might include:

Papers are welcomed on the work of Geoffrey Chaucer or, more broadly, on late medieval writing and culture.