There was a packed conference room in the newly-refurbished Institute of Historical Research at Senate House, as eager members of the Church Monuments and Monumental Brass Societies gathered to hear about new approaches to incised brass memorials. As a sequel of sorts to a conference reconsidering approaches to funerary monuments on the half-centenary of Panofsky’s Tomb Sculpture held at the Courtauld Institute in July, the stakes were high for a day on one of the potentially less-colourful genres of late medieval art production. However, the conference proved that brasses could also produce many novel and intellectually profitable methodologies, rather than inward-looking and basically descriptive case studies. 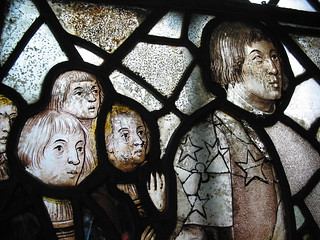 Richard Marks (‘Brass and Glass’: the medieval tomb-window) began the day with some pearls he had discovered in his relentless trawling of late medieval parochial wills, and that “brass and glass” was more than just a rhyme: many church windows acted as surrogate funerary monuments. Without the wills, there would be no way of knowing that the fragments of stained glass were patronised by the memorialised person under our feet. The use of documents to consider individual agency was also explored by Jessica Knowles on All Saints North Street in York (’Controlling the Past’: the Medieval Brasses of All Saints North Street, York), and at the end of the day by Christian Steer on the brasses in the lost London convent of the Friars Minor (’A Melting Pot of Death’: Burials and Brasses in the London Grey Friars). This veritable carpet of memory raised the intriguing questions of why the Franciscans were so popular among well-to-do Londoners, and how the friars themselves – supposedly unable to own property – bought their own brasses. 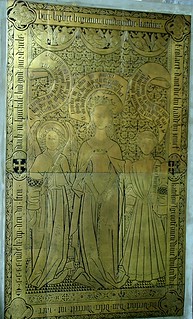 The idea of the importance of patrons’ agency in the design of memorials was raised in the paper by Matthew Ward discussing Chellaston alabaster workshops (Late Medieval Style: the Role of Agency and the Workshop). Michael Carter then showed how an alleged London Type-B brass in Fountains Abbey was almost certainly later than the usual timespan of that workshop; instead the evidence of the iconographical motif of raising a mitre to show off a cleric’s doctoral credentials gave us the identity of the commemorated abbot (The Mysterious Mitre on the Monument). Looking outside of the constraints of the medium continued: Harriette Peel (Women, Children and Guardian Angeles in Late Medieval Flemish Funerary Art) also used novel iconographical analysis to show that a Flemish brass commemorating a young girl may be making appeal to female hagiography through its inclusion of a guardian angel. Sanne Frequin brought colour to proceedings with some technical findings of the polychromy of Tournai Marble monuments: supposedly a “pure” medium like brass (Tournai Stone: an investigation of materiality).

It is often forgotten that England, with its religious rather than social revolution, has a much richer corpus of funerary monuments than much of Europe. Ann Adams used the English corpus of tomb chest-top brasses to creatively illuminate the apparently peculiar choice of the genre over sculpted effigies by some Flemish nobles (‘Revealed and Concealed’: Monumental Brasses on Tomb Chests – the examples of John I, Duke of Cleves and Catherine of Bourbon). Robert Marcoux (The Social Meaning and Artistic Potential of a Medium: Brass and the Medieval Tombs of the Gaignières Collection) reminded us of the importance of the Gaignières collection in the absence of the physical objects, and demonstrated its statistical potential in mapping aesthetic tastes over time. The varied papers, coupled with a lively, knowledgeable and generous audience, made for a day that proved that the humble brass lurking under the carpet in many a parish church can prove a lucrative genre for the modern art historian’s inquiry.

This review was originally published in Medieval Memorial Research newsletter, a free biannual summary on current developments concerning research in memoria of the Middle Ages and the Early Modern Period (till circa 1600), and is part of Medieval Memoria Online.

© The British Library Board

Papers are sought on all aspects of ‘Science, Magic and Technology’ in late medieval literature and culture and particularly within Chaucer studies. Approaches might include:

Papers are welcomed on the work of Geoffrey Chaucer or, more broadly, on late medieval writing and culture.

The Parthenon’s sculptural program is steeped in genealogical myth beckoning ever backward across imagined aeons. Cosmic and epic narratives, and the great boundary catastrophes that separated the ages, established temporal and topographic frameworks through which Athenians understood who they were and where they came from. By taking the long view from the Archaic Acropolis through to the fifth century, the power of architectural sculpture in creating and communicating a shared memory of Athenian origins and identity is revealed.  For a culture without media, and without a sacred text, the centrality of great architectural sculptures in forging this solidarity cannot be overstated.

The event will be followed by a reception sponsored by Head of Zeus publications.
This is an open and public event: all are very warmly invited.

The exhibition of a select number of manuscripts and incunabula from the Hart collection runs until tomorrow, 28th November! For more details see: http://blackhartbooks.wordpress.com/the-exhibition/