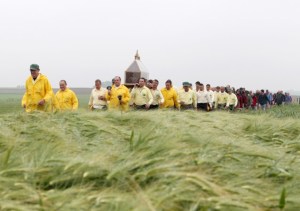 Walking with saints: protection, devotion and civic identity. The role of the landscape.

Since the adoption of the UNESCO Convention for the Safeguarding of Intangible Cultural Heritage in 2003, the issue of cultural practices has increasingly gained the attention of heritage professionals, academics, decision makers and practitioners alike. Many practices, rituals, performances, social traditions, craftsmanship and more have since been put on the list of Intangible Cultural Heritage. However, despite the growing interest in the social dimensions of cultural heritage and the recognition of the importance of the intangible aspects of heritage, many issues still need further reflection.  A crucial aspect is the interaction and relationship between intangible cultural heritage and its spatial contexts. This is part of a broader “spatial turn” in historiography and research.
For centuries people in Europa and elsewhere have walked the landscape carrying the relics of martyrs and saints. By doing so they gave meaning to and altered the significance of the land, be it urban or natural, in more ways than we imagine. One of these aspects is the way in which the landscape is transformed by walking it, thus setting paths, reinforcing boundaries, strengthening a community’s identity in relation to a certain landscape or setting the pace of life according to the repetition of the traditional acts in time.
“Walking with saints: protection, devotion and civic identity” focusses on the origin and evolution of procession rites with a strong link with the landscape. This conference, therefore, aims at studying the religious landscape, be it a specific spot or a larger territory, not as the mere spatial background for spiritual activities, but as an active agent in the shaping, transmission and transformation of the spiritual activity of human beings throughout time. Hence, we invite also reflections on developments in the 19th and 20th centuries when a rediscovering of the past, both within and outside the Christian churches, was en vogue and when new ways of looking at the natural landscape were moulded in the aftermath of the industrialisation of the economy.

Though the starting point is an activity that is typical for Europe, we are interested in broadening the perspective to non-Christian and non-Western traditions that have an important connection with the landscape in which they are performed.  It is generally known, for example, that the landscape and natural phenomena play an important role in the traditions of indigenous cultures in Australia, the Americas and Africa. In Asia walking with the statues of gods is a common, though little understood, phenomenon. It is to be expected that these traditions can broaden our understanding of the role of the landscape in the development and sustainability of immaterial heritage.

Papers are invited that deal with the following themes of the conference:
•    Sacralisation of the landscape: alteration, destruction and resistance
•    Immaterial heritage: religion and landscape
•    Perennial aspect of immaterial heritage
•    Immaterial heritage and community building: identity, assimilation, integration
•    Healing saints in their territorial context
•    The influence of processions on the landscape and on the drawing of parochial and city boundaries
•    Processions, pilgrimages and the senses
•    Healing saints, magic and assimilation

The starting point for the conference and the reason why it is held in Ronse is the Fiertel Ommegang. This procession originates from around 1090 A.D. and is yearly held on Trinity Sunday. During a walk of 32, 6 km the inhabitants of Ronse circumscribe the territorial boundaries of the city carrying Saint Hermes’s relics for protection and cure. For ages, the Fiertel has been one of the most important religious activities in the region and it has to date remained a strong symbol of the inhabitant’s civic identity even in times of secularization.
This 3 day conference will be hosted by the city of Ronse and is part of an assessment of the local Fiertel procession as a possible candidate for recognition as UNESCO Intangible Cultural Heritage.

Please submit papers for individual sessions no later than December 10 2017.
Proposals should include
– A paper title of max. 10 words
– A paper abstract of max. 350 words
– A short C.V. of max. 1000 words including current current affiliation and full contact details
All documents should be merged into 1 single PDF file.
Proposals should be sent to papers@wws2018.com

While the sessions proposed by the conference organisers focus on the western European and Christian traditions we welcome complete session proposals on related themes covering non-Western and non-Christian traditions.
The aim of the conference is not only to study the Fiertel in its local context, but also to trace traditions and rituals which are cross-confessional and transcultural. We hope that this reflection and dialogue will help us to understand the origins of the Fiertel, as a ritual and spiritual quest outdating Christianity.

Full session proposal are to be submitted by December 10 2017.

All documents have to be merged into 1 PDF file.

Proposals should be sent to papers@wws2018.com