All is thriving in medieval architecture publishing from the Romanesque to the Late Gothic: here are some very special books that have been published in the last few months.

As always do let us know of any recently-published medieval art history books you would like us to include in a book roundup – we would be happy to let people to know about them!

Medieval Toledo is famous as a center of Arabic learning and as a home to sizable Jewish, Muslim, and Christian communities. Yet its cathedral—one of the largest, richest, and best preserved in all of Europe—is little known outside Spain. In Toledo Cathedral, Tom Nickson provides the first in-depth analysis of the cathedral’s art and architecture. Focusing on the early thirteenth to the late fourteenth century, he examines over two hundred years of change and consolidation, tracing the growth of the cathedral in the city as well as the evolution of sacred places within the cathedral itself. Nickson goes on to consider this substantial monument in terms of its location in Toledo, Spain’s most cosmopolitan city in the medieval period. He also addresses the importance and symbolic significance of Toledo’s cathedral to the city and the art and architecture of the medieval Iberian Peninsula, showing how it fits in with broader narratives of change in the arts, culture, and ideology of the late medieval period in Spain and in Mediterranean Europe as a whole.

Tom Nickson is Lecturer in Medieval Art and Architecture at The Courtauld Institute of Art, London.

Prompted by the recent discovery of an impressive three-metre tall late Gothic drawing of a soaring tower and spire, this book offers a rare insight into the processes of designing and building a major Gothic project. The drawing’s place and date of creation are unknown, and it corresponds to no surviving Gothic tower. Equally mysterious is the three-quarter, top-down perspective from which the tower is represented, without parallel in any other medieval drawings. Who drew this? When? And what did he hope to convey with his choice of a top-down representation of the tower? Building a Crossing Tower explores these questions, and uncovers the dramatic circumstances in which this drawing was created.

Costanza Beltrami is a PhD student at The Courtauld Institute of Art, London. 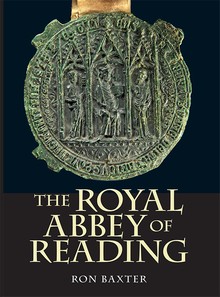 Ron Baxter – The Royal Abbey of Reading (Boydell and Brewer)

Reading Abbey was built by King Henry I to be a great architectural statement and his own mausoleum, as well as a place of resort and a staging point for royal itineraries for progresses in the west and south-west of England. From the start it was envisaged as a monastic site with a high degree of independence from the church hierarchy; it was granted enormous holdings of land and major religious relics to attract visitors and pilgrims, and no expense was spared in providing a church comparable in size and splendour with anything else in England.
However, in architectural terms, the abbey has, until recently, remained enigmatic, mainly because of the efficiency with which it was destroyed at the Reformation. Only recently has it become possible to bring together the scattered evidence – antiquarian drawings and historic records along with a new survey of the standing remains – into a coherent picture. This richly illustrated volume provides the first full account of the abbey, from foundation to dissolution, and offers a new virtual reconstruction of the church and its cloister; it also shows how the abbey formed the backdrop to many key historical events.

Ron Baxter is the Research Director of the Corpus of Romanesque Sculpture in Britain and Ireland.