Call For Papers: Heraldic Artists and Painters in the Middle Ages
(Poitiers, 10-11 Apr 2014) 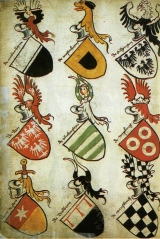 The big names of art history such as the Limbourg brothers, Donatello, Pisanello, Barthélemy d’Eyck, Jean Fouquet or Albrecht Dürer have left important traces of their preoccupation with heraldic and emblematic depictions, whether in preserved artwork or by being mentioned in financial sources. Besides them, a huge number of other, less well known artists have also contributed to shape the medieval heraldic heritage.

Many questions need to be asked here: about the formation of those artists and their heraldic culture, about the extent of their intervention in the conception of heraldic and emblematic programs, and about their relationship to the patron. On what basis did they work, did they have textual descriptions or already any drawn models to start from? Which liberties did they take in dealing with the heraldic rules of depiction? What was their eventual contribution to the evolution of heraldry in the late Middle Ages and did artistic creation contribute to the spreading of heraldry as a mean of symbolical and political communication as well as prestige? How have art historians treated this part of medieval artistic creation so far? And which role did the heralds play in this matter? Could it be possible that they did execute heraldic depictions as well and if so, which artistic skills did they need to do so? Finally, how do we have to imagine the creation of heraldic depictions such as mural paintings, painted roll of arms or the illustrated charters of concessions of arms?

Papers can be presented in English or French.

Proposals should be sent by 5th January 2014 together with an abstract
(200 words) in English or French to hiltmann@uni-muenster.de