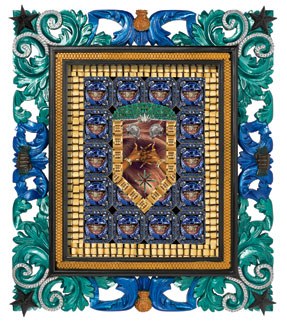 The close ties between medieval revivalism and the construction of cultural identities have long been recognized. The appropriation of the medieval past by white supremacist and nationalist groups has especially attracted comment over the past two years, and many scholars of medieval studies have traced those appropriations and highlighted the myths and misconceptions upon which they are built. The association of medievalism with the construction of normative (white, heterosexual, cisgender, Christian) identity has come to be so strong that it is often assumed that those who fall outside such identity groups would (or even should) have little or no interest in the Middle Ages. That this belief, which can troublingly be found in in the scholarly community just as much as the general public, is patently false could readily be seen at The Metropolitan Museum of Art’s 2018 “Heavenly Bodies” Gala. But similar to the invocation of the medieval past by such artists as Kehinde Wiley and Ron Athey, the medievalism of the Met Gala was treated somewhat superficially, with more concern for the glamour of the event than the complex coding of the fashion and its wearers. These sessions will consider the important, if often unmentioned, intersectional practice of medievalism in contemporary culture through papers and discussion about the use of medieval motifs and themes in contemporary works in any media by writers, performers, musicians, and artists of color and by queer and trans-identifying creators. As such, these sessions seek to be a first step towards a fuller consideration of medievalisms that range outside the
customary assumptions about to whom the Middle Ages presents a usable past.

Intersectional Medievalisms I: Creators of Color
Even as medievalists have become much more attuned to the presence of people of color in medieval Europe, they have yet to fully consider the presence of the Middle Ages in the art, poetry, music, and other cultural expressions of contemporary people of color. While the references to medieval (and early modern) culture in such works as Kehinde Wiley’s paintings and Jay-Z’s Magna Carta… Holy Grail have been widely recognized, the arguably more complex reworkings of medieval culture by , RAMMΣLLZΣΣ, and Derrick Austin have thus far gained little notice. What is the medieval in the work of these artists? A contested source of oppression? A tool for cultural renegotiation and redefinition? A seductive space of myth and beauty? Must their use of the medieval past be understood necessarily as a pointed appropriation, or can it be seen as the mining of just another source of raw cultural material? Speakers are encouraged to consider not only the stakes of medievalism in this particular cultural moment, but also other aspects of these creators’ intellectual projects, such as the explorations of semiotics, phenomenology, intermedia creation, ornament and surface, and temporality that run through many of these works.

Intersectional Medievalisms II: Queering the Medieval
The scholarly approach of “queering” the past has revealed otherwise invisible, erased, or censored facets of medieval identity and relationships. This methodology also disrupts the cisgender and heteronormative binaries that all-too-often remain pervasive in the academy and in the popularly imagined Middle Ages. LGBTQ+ artists have also addressed these issues, at times turning to broadly-conceived medievalisms. Ron Athey, Gabriel Garcia Roman, and others evoke the cult of saints in their work, a poignant commentary about acceptance by the Catholic (and broader Christian) community. The relationship between medieval chant and the vocal performances of Meredith Monk and Oblivia deserves greater attention, as does the architectural and advertising medievalism of queer clubs, lounges, and Pride events (a project begun by the late Michael Camille). By focusing on the relationship between a creators’ identity and their conception of the medieval, we encourage speakers to consider how medievalism is practiced in contemporary culture and how to open the academy or museum as spaces of greater inclusion and dialogue.

While the two sessions will be split to allow for a sharper focus on the role of race and of gender and sexual identity in contemporary creative medievalism, the aim of these sessions is for all the work presented to be resolutely intersectional, looking to trace and illuminate connections rather than delineating borders.

To propose a paper, please send a one-page abstract and a completed Participant Information Form (available via the Congress website) by September 15 to Bryan C.
Keene (BKeene@getty.edu) and Benjamin C. Tilghman (btilghman2@washcoll.edu). More information about the Congress can be found here: https://wmich.edu/medievalcongress