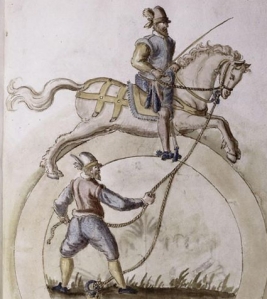 A series of four horse sessions and a Round Table, organised by Anastasija Ropa and Timothy Dawson, will take place during the International Medieval Congress 2018.

Palfreys and rounceys, hackneys and packhorses, warhorses and coursers, not to mention the mysterious ‘dung mare’ – they were all part of everyday life in the Middle Ages. Every cleric and monk, no matter how immersed in his devotional routine and books he would be, every nun, no matter how reclusive her life, every peasant, no matter how poor his household, would have some experience of horses. To the medieval people, horses were as habitual as cars in the modern times. Besides, there was the daily co-existence with horses to which many representatives of the gentry and nobility – both male and female – were exposed, which far exceeds the experience of most amateur riders today. We cannot reconstruct or re-experience the familiar and casual communication between humans and equids of the Middle Ages – or can we? At our sessions on the Medieval Horse, we will try to deduce, describe and debate the place of the horse in medieval society.

Loïs Forster, The typology of horses in Burgundian chronicles of the 15th century

Marina Viallon, Horsing Around at the Angevin Court of Naples: Study of Two Fourteenth-century Enameled Horse Bits Preserved in New York and Turin

Luise Borek, Dead horses in Arthurian Romance (and beyond)

Session 908: Reconstructing the Medieval Horse: A Round Table Discussion

Session 1502: Horses in the Orient

Romain Lefebvre, The role of the horse in Tangut society

Gail Brownrigg, Was the Horse Collar Invented in China?

For more information about the sessions, including the session abstracts, please see the IMC programme

Anastasija Ropa holds a doctoral degree from Bangor University (North Wales), for a study in medieval and modern Arthurian literature. She has published a number of articles on medieval and modern Arthurian literature, focusing on its historical and artistic aspects. She is currently employed as guest lecturer at the Latvian Academy of Sport Education. Anastasija’s most recent research explores medieval equestrianism in English and French literary art and literature, and she is also engaged as part-time volunteer horse-trainer. In a nutshell: Lecturer at the Latvian Academy of Sport Education Graduate of the School of English, University of Wales, Bangor. Graduate of the University of Latvia Passionate about history, particularly the Middle Ages A horse-lover and horse-owner View more posts