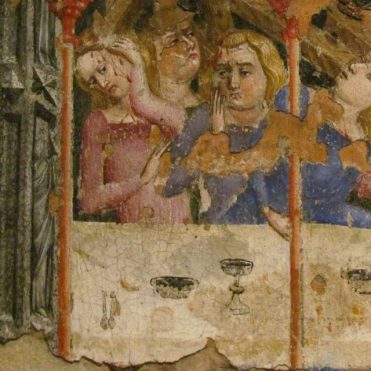 Dr Lesley Milner (The Courtauld Institute of Art) – ‘It made my heart thump for I was certain that it was gold.’

James Wilson Marshall’s 1848 discovery of gold in an American river was unexpected; he was actually building a saw mill. Similarly, in academic terms I found pure gold lying in unexpected terrain. Manuscript D&C/A/2/23 f3 in the archives of Lincoln cathedral is a fourteenth-century complaint to the Dean and Chapter of Lincoln cathedral about their property management. In this untranscribed and unpublished legal document is to be found important new evidence not only about the cathedral treasure house and also about the thirteenth-century shrine of St. Hugh.

A series of fourteenth-century wall-painting fragments from the former Chapel of St Stephen survive in the care of the British Museum. The fragments depict scenes from the Books of Job and Tobit. According to antiquarians’ drawings, the Job and Tobit paintings were located in the bays closest to the altar wall. They were part of a series of small-scale paintings positioned beneath the Chapel’s north and south windows. This paper offers an interpretation of the iconography of the fragments based on their position, the depiction of episodes from the Old Testament Books, and the historical context for the decorative scheme.

Jane Spooner trained as an art historian and as a wall paintings conservator. She is the Curator of Historic Buildings of the Tower of London and the Banqueting House, Whitehall, and works for Historic Royal Palaces. She recently completed a part-time PhD at the Courtauld Institute of Art, on ‘Royal Wall Paintings in England in the Second Half of the Fourteenth Century’.

Anastasija Ropa holds a doctoral degree from Bangor University (North Wales), for a study in medieval and modern Arthurian literature. She has published a number of articles on medieval and modern Arthurian literature, focusing on its historical and artistic aspects. She is currently employed as guest lecturer at the Latvian Academy of Sport Education. Anastasija’s most recent research explores medieval equestrianism in English and French literary art and literature, and she is also engaged as part-time volunteer horse-trainer. In a nutshell: Lecturer at the Latvian Academy of Sport Education Graduate of the School of English, University of Wales, Bangor. Graduate of the University of Latvia Passionate about history, particularly the Middle Ages A horse-lover and horse-owner View more posts